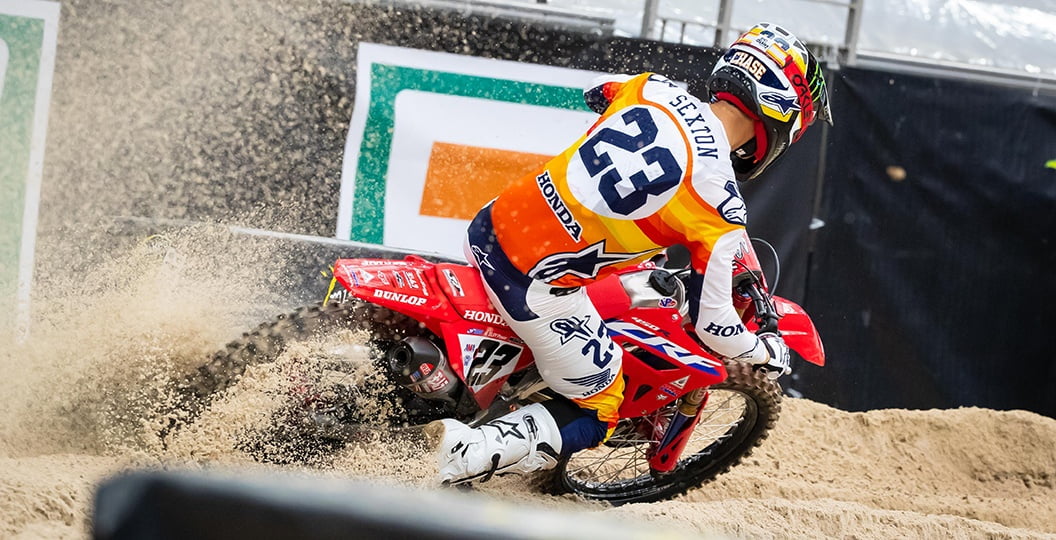 Team Honda HRC rider Chase Sexton crashed while leading the second round of the 2021 Monster Energy Supercross in Houston Texas. In just his second Supercross race on a 450, the rookie won his heat race and then took the lead to start the main event. He led the first six laps and crashed on the seventh lap of what ended up being a twenty-nine-lap main event.

Sexton had similar comments in the HRC Honda press release.

“The day started off pretty good. I had pretty good practice qualifiers and was second in both of them. I got my first heat-race win in my second race on a 450, which was good. In the main event, I got a good start and was really feeling good out front—in control and hitting my marks really well. I put a pretty good gap between myself and [Eli] Tomac but made a small mistake that cost me big—hit the ground pretty hard. I’m really sore and my right shoulder is pretty beat up. I hope to be back racing here soon and try to finish the job and get my first win.”

UPDATE!!
It kills me to say I won’t be lining up Saturday for the 3rd round of @supercrosslive due to my crash Tuesday night. I’ve been having problems with my right shoulder being weak and limited range of motion. Getting MRI done tomorrow back in Florida to see if there is any damage done internally. Hoping to be back next weekend at 100% for Indianapolis. Thank you for the support 🙏🏻

Check out the Houston Supercross highlights, including Sexton’s crash here.