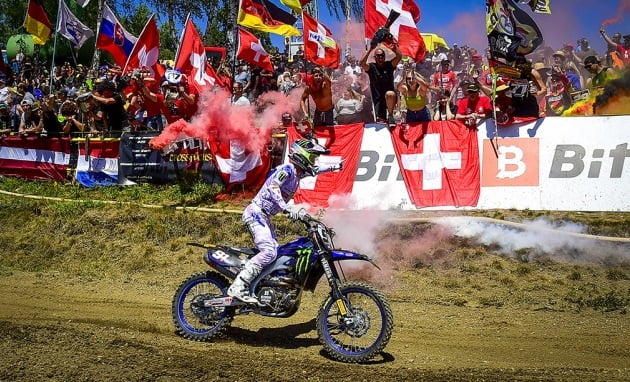 Jeremy Seewer won the Czech Republic MXGP of Loket with a 1-2 over Maxime Renaux’s 3-2 and Tim Gajser’s with 2-3 scores. Gajser still has a massive lead in the MXGP championship points. Tim Gajser’s  stranglehold on the 450 Championship, may bemade all that better by the rumor that the MXGP series may be shortened from 19 rounds to 18 rounds (which would leave only five GPs left in the series).

Yamaha’s Jago Geerts took the victory at the Czech250  Grand Prix in Loket and continued his see-saw battle with Tom Vialle over who gets the Red Plate. Geerts went 3-1 and Vialle went 10-2. Thibalt Benistant was second overall with 1-4 and Simon Laengenfelder used a 3-2 to get third overall. Vialle finished with 10-2 scores. The next Grand Prix is on July 24 at Lommel, Belgium.