| The Home of Motocross News
Home News Aaron Plessinger on Taking his First Podium With KTM in His Second... 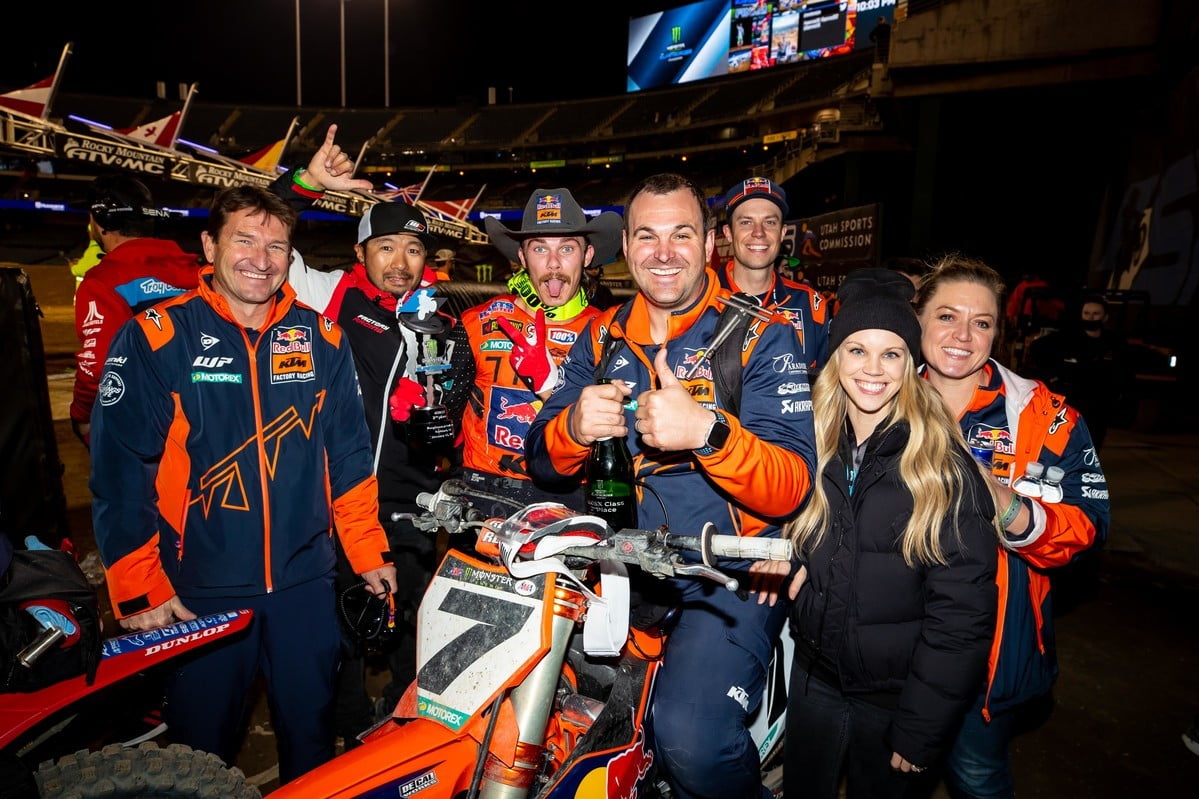 Aaron Plessinger KTM Factory team rider started from fourth place and wasted no time reaching the top three. He came into the fight for the lead and chased the leaders for a few laps until he reached second place. He kept close to the leader, but couldn’t close the gap to the point of attacking the leader, finishing second.

Aaron Plessinger: “The opening round was a little rough for me but I re-grouped and had a really good week with the team. We did some testing with the whole crew and spent some time at the track and man, did it turn things around. I’m stoked! This is my second podium ever in the 450 class and I can’t thank these guys enough. It’s my first year on this bike, so I’m stoked on Red Bull KTM and everybody out there. Thank you!”

Following a strong podium finish at round one, defending 450SX Champion Cooper Webb had all intentions of carrying that momentum into round two. Feeling under the weather on race day, Webb pushed through the qualifying sessions to come away with a solid top-three aboard the KTM 450 SX-F FACTORY EDITION. He got off to a sixth-place start in 450SX Heat 2 and battled his way into the top-five halfway through the race. With his teammate Musquin close in tow, Webb was able to secure fifth in the heat.

In the Main Event, Webb found himself back in 11th off the start and he dug deep to make his way through the field early on. He got into seventh around the midway point and from there he maintained a steady pace to secure a seventh-place finish.

Cooper Webb: “Tonight was a tough one, to say the least. I came down with a cold yesterday and fought through it the best we could today but definitely didn’t feel great at all. Practice went pretty good with third but I just tried to save as much as I could for the Main Event. I had a terrible start in the main and I made my way forward as best I could. It was definitely tough battling the sickness but I’m going to get healthy this week and go into San Diego with a fresh body and fresh slate. As far as the championship goes, we’re still in a good spot so we’ll see where it ends up.”

It was also a challenging round for teammate Marvin Musquin, who struggled with his starts throughout the night. Qualifying inside the top-five, Musquin got off to an eighth-place start in 450SX Heat 2 and he settled in behind Webb early on. The KTM duo worked their way into the top-five battle, with Musquin ultimately finishing sixth in the heat.

In the Main Event, Musquin got shuffled back to ninth on the opening lap and he found himself racing mid-pack once again with his teammate Webb early on. They began making moves midway through the race but Musquin dropped off the pace toward the end, resulting in an eighth-place finish on the night.