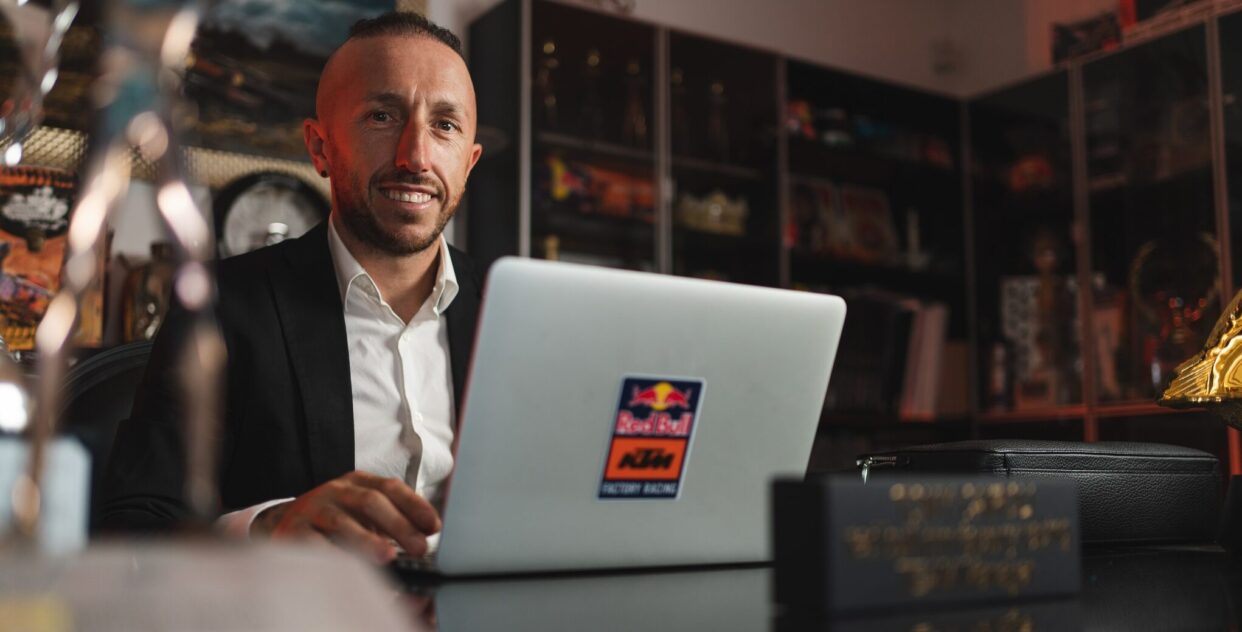 Antonio Cairoli is the new Red Bull KTM Factory Racing MXGP Team Manager! Brilliant news and with a team led by Jeffrey Herlings and a young guy called Everts, the orange army is back strong in 2023. Did we also mention Joel Smets and Stefan Everts obviously also spending a lot of time in the KTM race tent!!

Red Bull KTM Factory Racing have made several strategic changes to their FIM MXGP World Championship structure that will funnel into their bids for success in 2023 Grand Prix. Chief among those is a fresh role for MXGP and KTM legend Tony Cairoli, who will front the squad as Team Manager.

For 2023 KTM are pleased to announce that nine-times world champion Tony Cairoli will become Red Bull KTM Factory Racing Team Manager. The 37-year-old, who was still competing at the highest level with AMA Pro National appearances this summer, won six of his championships with KTM SX-F technology and has been a Red Bull KTM factory rider since 2010. Tony boasts exceptional knowledge of not only the sport but also KTM’s racing culture and philosophy. He will sync with fellow former multi world champion Joel Smets who will train and coach a selection of Red Bull KTM Factory racing riders and other athletes in the group.

Red Bull KTM Factory Racing recently celebrated their fourteenth title in the MX2 division since 2004 and with the KTM 250 SX-F thanks to Tom Vialle’s thrilling last round victory of the 2022 campaign in Turkey. Except for the 2015 season, the crew have claimed at least one MXGP or MX2 crown each year since 2010. Smets has been instrumental in Vialle’s development and two crowns since 2020.

On the technical side Vialle’s well respected and experienced mechanic Harry Norton – who helped refine two versions of the title-winning KTM 250SX-F, the 2020 edition and the brand new 2023 model – will take over the role of Team Technical Co-ordinator while long-standing leader Dirk Gruebel will assume the position of Project Manager for Motocross Development.

Claudio De Carli, the man who guided Cairoli to the six championships between 2010 and 2017, will now oversee KTM racing efforts as the new Motocross Race Director. The Italian forged an incredibly strong bond with KTM at the start of the last decade when he helped deliver the factory’s first premier class distinction in MXGP.

Tony Cairoli, Red Bull KTM Factory Racing Team Manager: “2022 was a change for me and now this is another chapter! It was great to race again this year but it was also positive to take a small step back from racing and see things in a different way. I really hope I can bring as much knowledge and passion as possible to this new role. I will have some learning to do but I also worked with some amazing people in my career, so I expect to use this experience. We are already thinking about our goals for 2023.”

Robert Jonas, Head of Motorsports Offroad: “It is very satisfying to see how we were able to reorganise and clarify the positions of important people for Red Bull KTM and other projects. I think there is some exciting potential because there is so much priceless experience; both on the ground at the track and back in the workshops. If Tony can bring the same enthusiasm for motocross and learning as he did when he was a rider then this next challenge should go very well for him and be of a big benefit for the team. I want to thank all of the staff involved for getting behind the plan and how we will head into the world championship in the coming years.”

Pit Beirer, KTM Motorsports Director: “This is the next step in our race department vision for motocross and for the way we want to keep the brands and organise the best potential in the paddock. It was clear that Tony’s experience and never-ending passion for the sport was something we could count on, just like we did in 2009 when we first started talking. The De Carli connection has been one of the big success stories for us and I’m pleased that it can progress and continue. It’s great to have Joel in his development role still and Harry and Dirk taking on different tasks. We have some great riders and some excellent staff for 2023 so I’m sure we’ll have plenty more exciting times.”

Claudio De Carli, KTM Motocross Race Director: “It feels very special to have this new position and to continue my story with Pit, Robert and the whole KTM group. As many people know we started our partnership well over ten years ago now and it was strong mutual trust that allowed us all to succeed right away and then to carry on winning in MXGP. We are now in transition to the next generation but we have the best possible foundations. I hope we can keep the motocross division as one of the most prolific for KTM and the race department. We’ll push to the maximum to make it happen across the categories.”