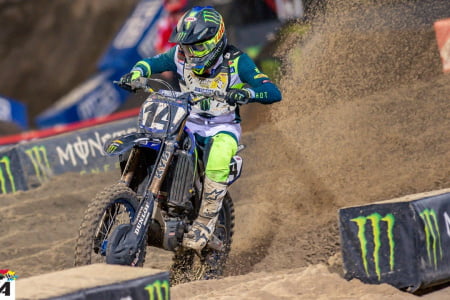 Round 12 of Monster Energy AMA Supercross kicks off tomorrow in Seattle, Dylan Ferrandis, Justin Brayton and Shane McElrath will all miss round 12 due injuries..

MotoConcepts Honda’s Justin Brayton missed round 11 last weekend in Indianapolis after crashing hard in the whoops during qualifying and sustaining a concussion.

He announced on his Instagram this week that he will also sit out this weekend.

“After a get off last weekend in Indy, resulting in a concussion, I’m gonna sit this weekend in Seattle out. After consulting my doctor, talking with the team and my family about it we think it’s best to wait and get back on the bike next week and be 100% ready for St.Louis in a couple weeks. Good thing is I’m feeling totally fine and have been in the gym and on the bicycle a few times this week, but Supercross is a different beast and at this point in my career it’s best to be smart. See ya in a couple weeks.”

Star Racing Yamaha’s Dylan Ferrandis will miss a second straight week after sustaining a wrist injury in Detroit when he came up short on a jump. There aren’t any fractures, but it’s extremely sore and he has elected to sit out this weekend as well. Dylan posted on social media:

Rocky Mountain ATV/MC-WPS-KTM team has dealt with a ton of injuries this year and now Shane McElrath is out for Seattle after he went down during qualifying in Indianapolis and hit his head. Joey Savatgy and Max Anstie are also out for this weekend.