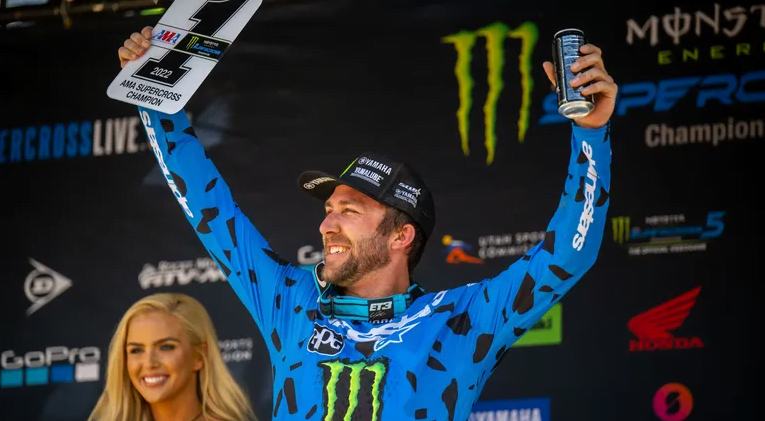 Tomac’s fifth place finish at round 16 of the 17-round series gave the 29-year-old racer the distinction of becoming the oldest rider to capture the Supercross Championship in the sport’s 49-year history.

Tomac grabbed second place at the start of the Main Event. A mistake from the leader put Tomac into the lead and in position to take the title with a victory. The hard pack track was dry and slick, and Tomac played it smart with a protection pace to stay upright. Tomac eventually dropped back to fifth place. On the podium, Tomas said that he’d suffered a minor knee injury two rounds prior that has led to a more conservative race strategy.

Tomac joined the Monster Energy Yamaha Star Racing team just prior to the 2022 season. Tomac’s seven race wins thus far in the 2022 series moved the Yamaha rider to a tie for fourth place on the all-time wins list. Prior to this season, Yamaha had only amassed two wins between the years 2013 and 2021. Tomac’s championship was the first premier class championship for Yamaha since 2009.

One round remains in the 2022 season, set for next Saturday at Rice-Eccles Stadium in Salt Lake City. The season finale marks the 15th different city to host a Monster Energy AMA Supercross in 2022.

Tomac has 44 career wins in AMA Supercross, good for a tie for fourth with Chad Reed on the all-time list. Ricky Carmichael is third on the list with 48. Jeremy McGrath (72) and James Stewart Jr. (50) lead that list.