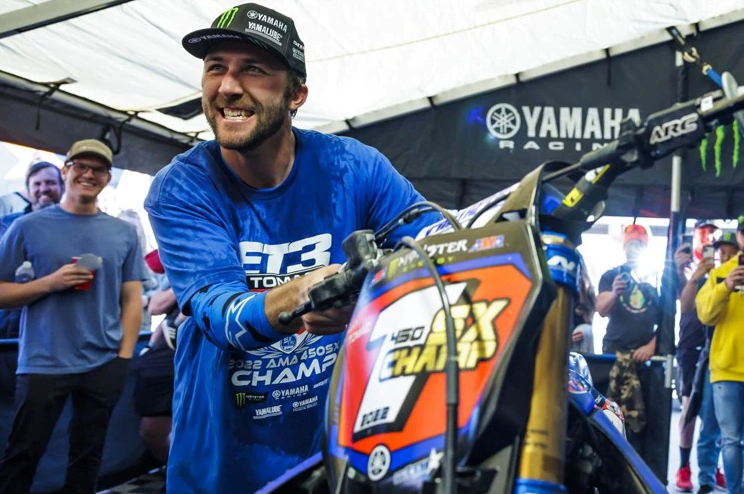 Eli Tomac 450SX champion will likely miss this Saturday’s Monster Energy Supercross Championship finals at Salt Lake City due to a torn MCL sustained earlier in the season at Atlanta.

Tomac has revealed that he carried the injury from round 14, with his results since impacted in an attempt to manage the ligament tear and successfully clinch the title.

“I guess it’s the only thing in the knee that can heal itself, so I’ve got the take the time and heal it and hopefully not tweak it again,” Tomac explained on the PulpMX Show tonight. “For now, it is getting better every day.

“The hardest thing to do is squeeze a bike, because that is the inside of your knee, that’s the point of contact, and that is the part that gets a little bit irritated.

“I’ve been decent in practice, but where it has been getting me is the halfway point in the mains, you saw that in Boston and Denver, where I am kind of just riding around. It’s kind of affected the way I weight the bike in the turns too – I’m hoping I can gain that strength back.

“Looking to the future, I think I will be okay for outdoors, to go ahead with it, as long as I don’t piss it off. We will just see. I would say there is a higher probability of me taking this week off… unless things really change in the next couple of days, I would say I’m not racing Salt Lake.

“I am going there no matter what to be with Yamaha and all the fans in Salt Lake, but I would say there is a 98 percent chance I don’t race. And what’s crazy is it’s torn, but it is getting better – it doesn’t really even make sense to me.”

This year’s Monster Energy Supercross has arguably been one of Tomac’s best seasons to date, claiming seven victories in his first campaign with Monster Energy Star Racing Yamaha, on route to clinching the title with a round to spare in Colorado.

“I’m not saying I’m not racing next year…” he stated post-race in Denver. “I’m trying to sign my [deal for] next year right now, actually. That’s in the works, so heck yeah, I want to keep going.”

Listen to the full PulpMX podcast