| The Home of Motocross News
Home News Eli Tomac on Glendale Interview – The Best Bike I Have Ridden... 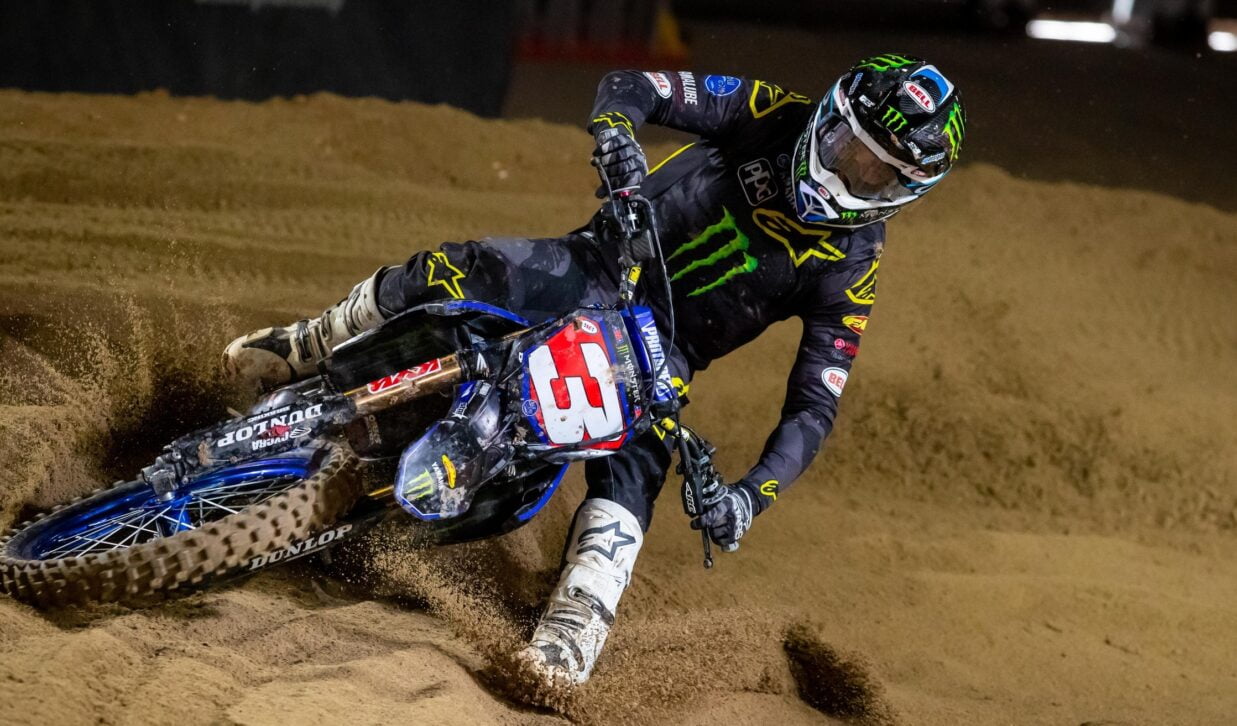 Monster Energy Yamaha rider Eli Tomac is really warming up and is taking control of the 2022 AMA supercross championship. The multiple time AMA champion scored 1-1-3 results for the overall at this years first triple crown round.

Tomac was perfect in the opening triple header, getting a lightning start and Tomac went on to win ahead of Jason Anderson and Malcolm Stewart, who both beat Ken Roczen into the podium placings.

Tomac was the overall winner, followed by Stewart and Sexton, who salvaged another top three result despite his finish in the opening race. Tomac now leads the championship points by 11 points entering Anaheim 3 next weekend.

Second overall win of the season, how good are you feeling with this momentum?

Tomac: I mean, its great. We started it with last week, where I was like finally where I deserve to be at the front of the race, or at least contending for the race. It feels really good to do it again. These triple crowns are long nights. Especially come the third race, it is like, okay, we got to do it again. Thankfully I put up those two good scores straight away, so that was my goal from the outset, put up a good score in the first one and try and maintain it from there and do what we can do. I had two holeshots and that was awesome. A lot of people don’t expect that from me, but we did it, it was cool.

Did you expect that from yourself?

Tomac: No, not two, but, I mean, I just had good starts. I also had a good gate and that paid off, having the fast qualifier for that gate. Overall, just a good night.

When did you feel moving to Yamaha was going to be good, in the off-season, or in one of these good races for you?

Tomac: I thought in the off-season it was a good move. I felt great and awesome and then A1 I was off, and I thought, okay, we have work to do, but I knew we could get there, and we could improve. By like San Diego, I knew I was just a tick away from being a potential race winner. It took a few rounds and after A1 I had a couple of questions for sure.

Due, it looks good, is this thing just easier to win on and does the team let you make more changes to the bike?

Tomac: Right now, I am at the point where it is just really good. Moto one and moto two tonight, more so moto two, it felt like I had Velcro on my tyres, it was just really, really good and it was a fun race to ride. This is one of the best bikes I have ridden in supercross and for that aspect, it is really exciting. Makes me feel good.

There seems to be a maturity and effortless with your riding we haven’t seen before, how much do you contribute to the bike and how much just to your mind-set in this season?

Tomac: A lot of it is feeling like when you feel like you are in the right spot, when you are not fighting things and just riding, like the days at the practice track. It takes a lot of work to get there, but once there, you feel really good. Like I said, moto two, I felt better on a supercross track than I have in a long time. It is exciting for us.

You mentioned coming out of A1 and now its better than its ever felt. What did you change?

Tomac: I can get into it a little bit. One was starts, I wasn’t consistent in the starts, and we figured that out, then gearing things, just felt right and what felt good through the whole moto, which is all I can give you.

With the extra freedom, do you feel you are a better tester now?

Tomac: There is freedom there, but the guys who work on the bike, making the changes, those are the people who are making this work.

We missed the Glendale event last year; how did it feel to be back?

Tomac: I thought we had a great crowd. The pits were packed, and it was the most jam packed this year. This place is huge, and it looked pretty full. I mean, when you miss a year, the fans get pretty excited, and it was good to have them back.

We talk a tone about the bike, but you also talked about the people in the team. Did you know that coming in, or is that just a bonus for you?

Tomac: I knew a few people there, but many I didn’t know, and it is a good environment, and it was the perfect fit riding with different guys and something new to do and look at.