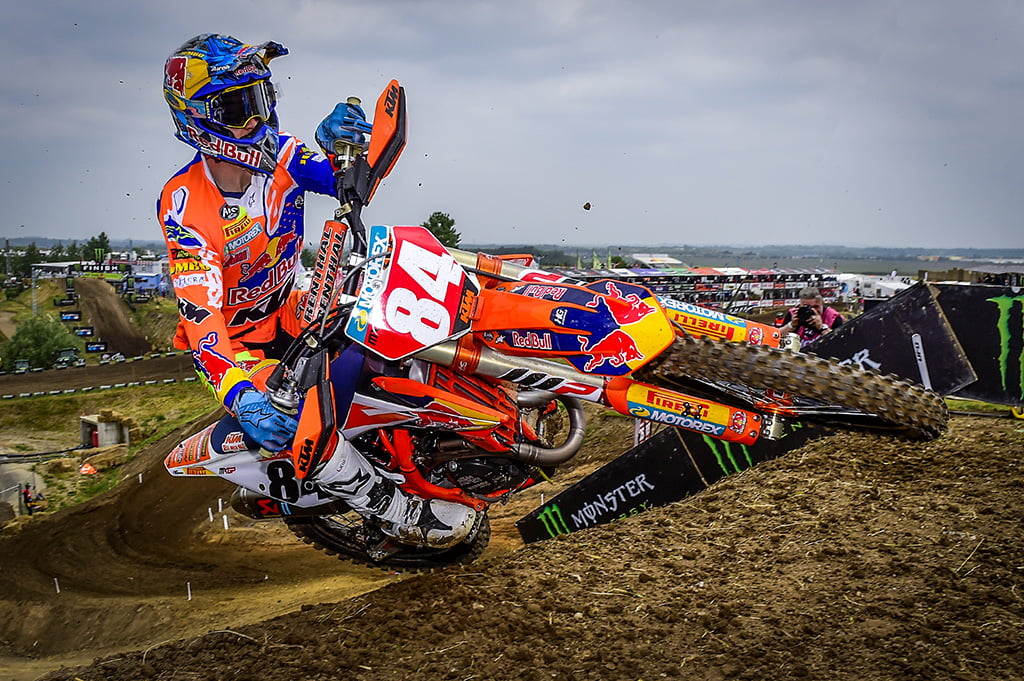 Dirk said: “I mean we would like that Jeffrey is back but he’s still recovering and it’s a bit slower than expected. It is a difficult bone that he broke, he’s just off the crutches a bit and now the rehab starts. Of course, the season is going on and every week there’s a race, we were anticipating him back here but we need to wait and be patient.

On racing the US motocross series Dirk didn’t shit the rumours down, admitting he doesn’t know where he will race yet but he would prefer him to stay in MXGP: “There’s a lot of rumours and nothing is confirmed like you say. We don’t know either – I would love him back here because this is the series, and this is the team of course.”

Say he goes to America, can you run an entire season without a 450F rider under this tent or would you have to get a fill-in rider in? KTM have done a lot in this championship and won it last year. I feel like you have earnt some good credit with your sponsors, but would there be pressure to make that happen?

Even for us, it would be good to have that bike out there. It would help us develop it quicker and everything, but who are you going to take? We tried with Mathys Boisrame and it went wrong. The 450F is not a toy at this level and, unfortunately, he got hurt straight away in the first outing. What can I say? There are not many names on the list where I can go, “Okay, let’s pick this guy now and give it a try.” It is a potential danger. The bike gets bad mouthed quickly when another guy crashes, just because they are not ready to ride it or not on that level. It is a potential risk as well. It is not a bad bike, do not get me wrong, and people crash on our bike as well as other bikes. It is just the sport lately – it is happening a bit too much. I do not see anybody who could step in.

The problem is that you cannot get any fill-in rider. You need a guy who will be in the top ten at least. There are expectations at KTM. If a guy gets on your bike and rides around in sixteenth, that is not going to help anyone. You cannot take any ol’ rider.

It is also about developing our bike. We need to have a certain speed and base with it. Like you said, we cannot just let a guy ride around in twentieth and then we will be happy. That is not the case, for sure not.