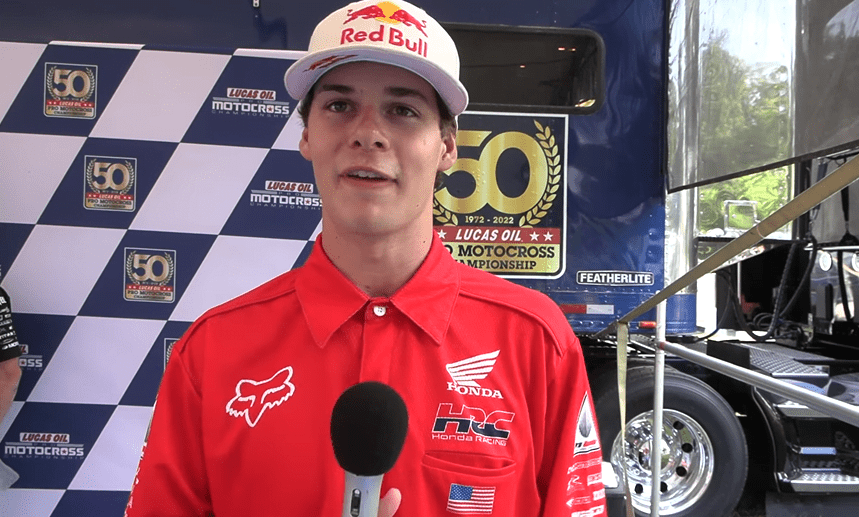 HRC Honda’s Jett Lawrence chats with us about his 2022 Millville National experience and we ask him what class he’s racing at the Motocross of Nations for Team Australia..

After an intense opening lap that saw Justin Cooper go down while leading and hold Jett up just enough to let Hunter by, the Lawrence brothers then took the race by storm and went bar to bar all moto but it was Jett who, with two laps to go, made the crucial pass as Hunter got infuriatingly held up by lapped traffic at the worst possible time! Despite his best efforts on the final lap, Hunter couldn’t make the pass on Jett as the younger brother again took the win. “I had to be better around the lappers,” said Hunter after the moto.

Hunter Lawrence has to be frustated. After taking the lead on lap one in race two with Jett on his tail it was looking like another Lawrence brother battle until a crash further down the field meant a red flag and all the riders had to go back to the gate for a restart!

This time Hunter didn’t get away well, coming around turn one in tenth as Jett started second and worked his way quickly into the lead passing Justin Cooper. From there Jett controlled the gap to second, now Jo Shimoda, as H. Lawrence worked his way up the field, but he could only get back to fifth, causing more championship points damage on a day that he had a big chance for 1-1 if things had went his way! But yet again it was Jett with his sixth overall win of the year..