| The Home of Motocross News 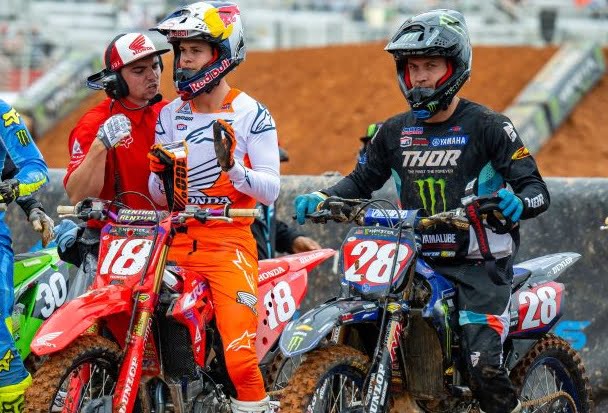 On the East/West showdown events, would you like to see more showdowns in one season? Do you feel it maybe bridges the gap going from the 250 class to the 450? Or does it bring extra pressure because it’s all the top guys in one race?

Jett Lawrence: I like it. I think it’s good because we don’t race each other all year. Even the practices, it’s not like we have an A group, B group. It’s kind of our one coast. So, it feels normal until you get to the main event and then it’s like, “Hey, you’ve got to race these guys that you haven’t raced all season.” I think it throws a big curve ball. You obviously watch the guys on TV to learn and you kind of have an idea of how they race, but you don’t know what it’s like being in that situation when you’re behind the goal. So, you never know what it’s actually truly like. You just see it on TV, which is I feel like a good thing. It makes it more fun, I feel like. Our season is pretty long, but the 450 is even longer. So, I think it’s a good setup with just riding fast guys every single race. I feel like it sets you up almost good for the 450. So, I wish we could do it more often, which would be cool. But we’re slowly getting back to it with two this year.

Hunter Lawrence: I agree. Obviously, the 450 is the premier. That’s why there’s two 250 coasts, because they obviously want to leave something to the premier class, the premier championship. So, I think it’s good. Having two shootouts is cool. If it will ever merge into just being a full 250 supercross championship, I’m not sure just due to the fact of there’s kids, there’s families going to these races that can’t afford to do the full season of a 450 class where there’s a little more money and funding in the 450 class, I believe. So, I’m not sure. I’m not educated enough to really say.

Christian Craig: I think it’s cool. I think having two is good, but if one of them was a little earlier in the year, I think you would get obviously more guys in it because less people hurt this late in the season. Then you wouldn’t have the guys worrying about the title also. So, that would be the only thing is a little bit earlier in the year, you kind of get a little bit more parity. I’m all about it. Maybe in the future that will merge. Who knows?