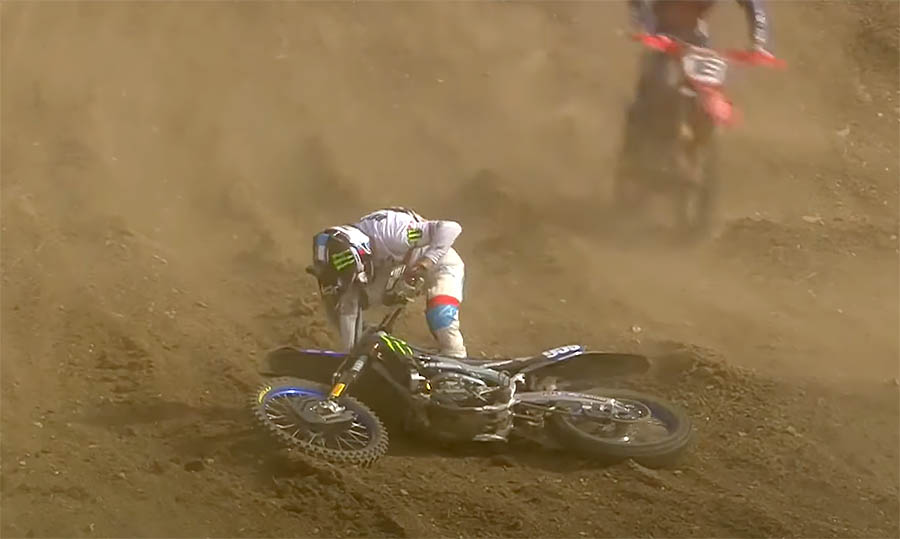 Monster Energy Yamaha Factory MXGP’s Maxime Renaux had a very hard crash in the qualifying heat at the eleventh round of the 2022 FIM Motocross World Championship, the Grand Prix of Germany, which has resulted in four broken vertebrae. Unsurprisingly, Yamaha has confirmed via the following statement that he will not race today.

“Following an initial medical assessment in Teutschenthal, Renaux was transported to the University Hospital of Halle where an MRI scan confirmed that he has fractured his T1, T2, T5 and T7 vertebrae. Renaux will return immediately to Belgium for a further assessment and to formulate a recovery program. An update on his treatment plan and a potential return to action will be posted on Yamaha-Racing.com and Yamaha Racing’s social media platforms when available.”

Renaux is currently second in the premier-class standings, in what is his rookie season aboard a YZ450FM, and trails Tim Gajser by 73 points. Crucially, he is just 26 points ahead of Jeremy Seewer in third and 33 points up on Jorge Prado in fourth. It is likely that he will fall to fourth in the championship standings, as a result of missing the on-track action today.

It seems as though his status for Indonesia is uncertain at this time, although one would presume that he is not going to make it to the starting line so soon after such an injury.

GoPro footage of the crash