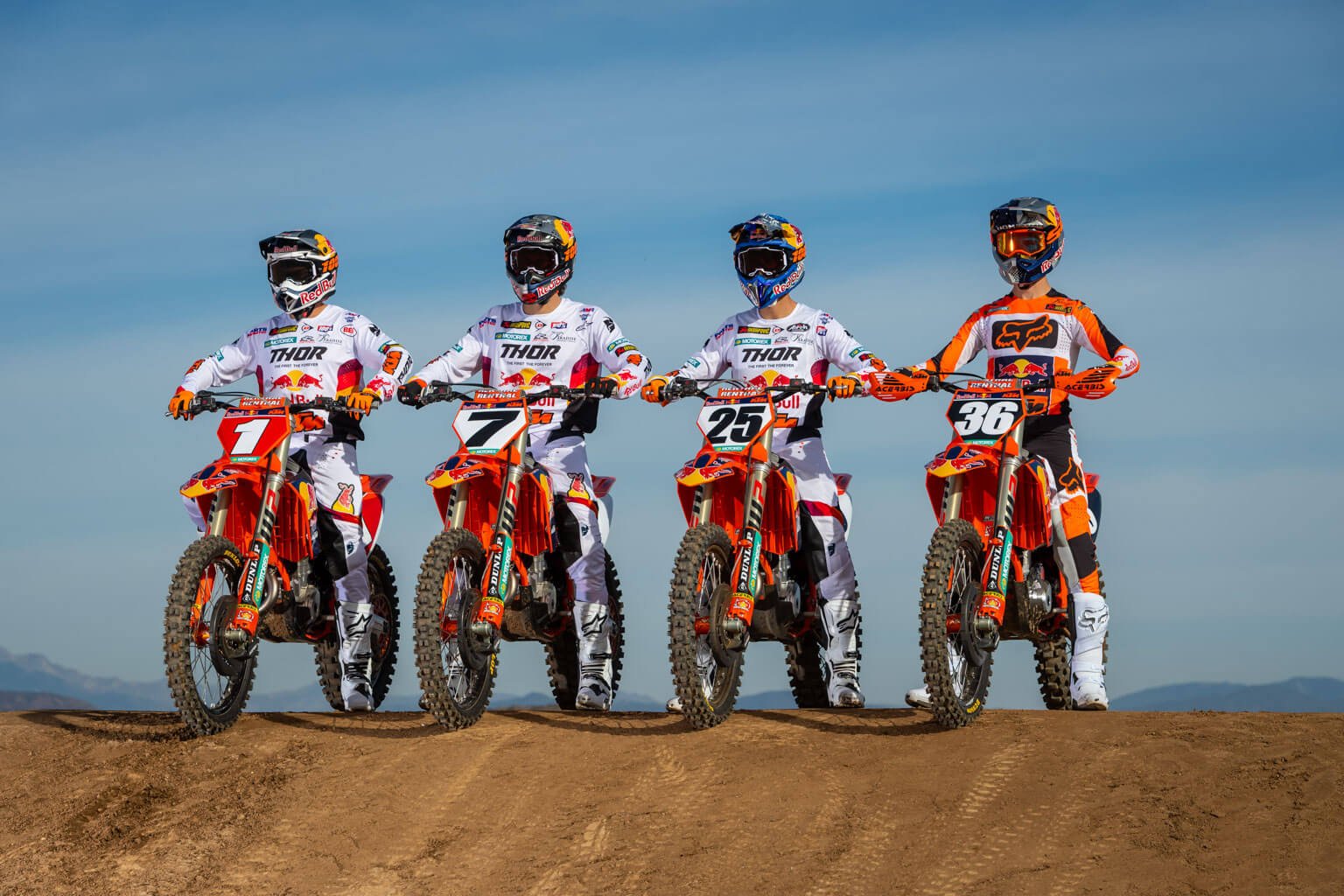 Solid four-rider Red Bull KTM Factory Racing team is set to enter the 2022 AMA Supercross Championship aboard the radically new KTM 450 SX-F FACTORY EDITION and KTM 250 SX-F FACTORY EDITION models. With only a month to go before the start of the series, the Red Bull KTM Factory Racing team came together in Murrieta, California to celebrate the launch of the new generation machines that all riders will pilot throughout the season.

Webb, the reigning 450SX Champion, will proudly display the number one plate aboard the new bike as he sets out to defend his title for the second time in 2022. The 26-year-old had an exceptional supercross season in 2021, sweeping half of the Main Events for a total of eight victories in the stacked class. He had a steady performance in the AMA Pro Motocross Championship, finishing fourth overall in the championship, and now his focus is set on bringing home back-to-back titles in supercross.

Cooper Webb:“I’m really excited for the upcoming series. It’ll be great defending the number one plate again, we worked hard last year to get the championship. We have a brand new bike this year and that is great. We’ve also been having fun with the new team dynamic and having Aaron [Plessinger] on the team. I’ve been teammates with him before, so it’s been great to reunite and have a three-man team on the 450, with Max on the 250. I’m looking forward to it.”

Aaron Plessinger: “It’s an amazing accomplishment for me to have joined the Red Bull KTM Factory Racing team. My dad used to race for KTM in GNCC, and won a couple championships, so it’s pretty special for me to get to be a part of this team. My goal is to get as many race-wins as I can and try to win these guys some more championships. My time is due and I feel like this year is going to be a really good year with two great teammates – Cooper and Marvin – I think we can really do some damage out there. The new bike is awesome. I love this thing. It’s so nimble and light, I can put it where I want it and the suspension works great on it. I think it’s going to be a really good year and I’m looking forward to it.”

Max Vohland: “It’s been a really great off-season and I’m looking forward to 2022 with the new teammates and the new bike. It feels fresh and I’m looking forward to it. The new FACTORY EDITION has been awesome , the whole package has been great from suspension to chassis and motor-wise – we’re making steps forward every day. I only have three SX races under my belt, so I have a little bit of experience, but I think this extra time I’ve had on the bike during the off-season has really helped and I feel like a completely different rider than last year, I feel way ahead of where I was last year for this new season coming up.”