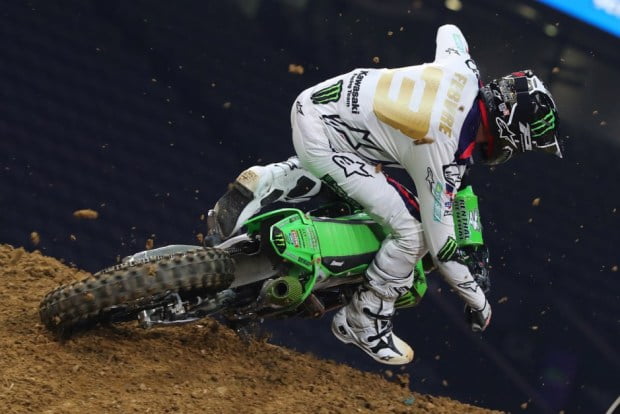 Romain Febvre underwent succesful surgery today on the right leg he broke at the Paris Supercross; the factory Kawasaki rider will rest for a few weeks before starting preparation for the 2022 season.

Together with several other leading MXGP riders Romain Febvre entered his last race of the season on Saturday; it was a unique opportunity to celebrate his second place in the FIM MXGP Motocross World Championship in front of the French fans. Feeling comfortable on the track laid out in the Paris la Defense Arena Romain posted the third fastest lap time, ahead of the US riders, in the Superpole to confirm his fastest time from Friday practice.

Fifth in the first of the three races Romain made a great start in the second sprint and was a challenging second behind Marvin Musquin when he crashed on the finish jump. Evacuated by the medical service and later transferred to the hospital Ambroise Pare at Boulogne Billancourt, where he had further examinations, Romain underwent surgery this morning; Professors Bernard Hollier-Larousse and Victoire Bouveau treated a double fracture of the tibia and fibula of the right leg. Following successful surgery, the Monster Energy Kawasaki Racing Team can communicate the actual situation as rumours have continued to appear on social media since yesterday.

Video of the crash from all angles