| The Home of Motocross News
Home News Tony Cairoli US Pro Motocross Ride is Over – “Time to go... 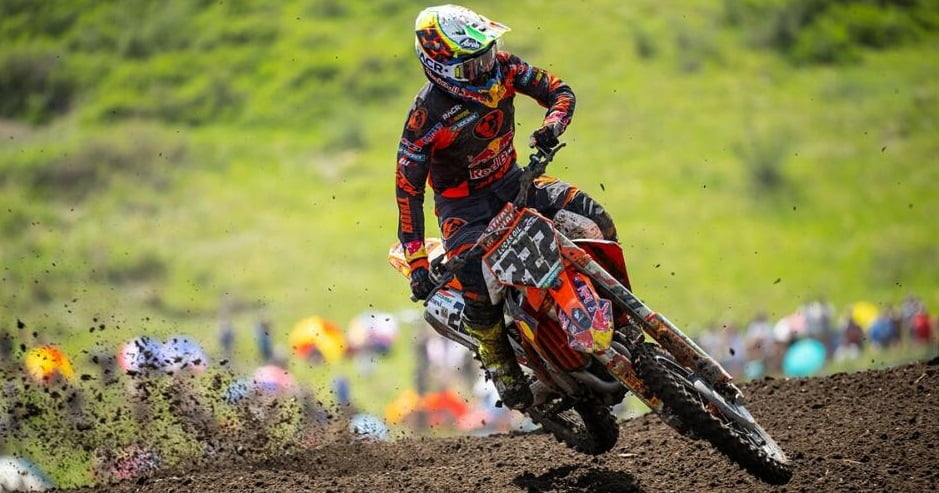 “Time to go back home!” said nine-times world champ Tony Cairoli after he hurt his knee riding in the weekend’s AMA round at High Point. “Super experience even if it was difficult without a proper preparation. I enjoyed the opening rounds of the @promotocross a lot. Thanks to my American fans and KTM USAKTM Factory Racing for making it possible and for giving me the best support.”

Cairoli initially said he’d do just two rounds but then extended it to four. He was getting close to a podium but had a double DNF on Saturday.

Cairoli, the fifth-place qualifier, was ready for a podium push at the start of the day. The Italian rider grabbed a seventh-place start in Moto 1 and started to climb forward but he came together with another rider early in the race and tweaked his knee, causing him to pull off and rest for the remainder of the race. Despite all efforts to attempt racing in Moto 2, the nine-time world champion wasn’t able to finish the day.

Antonio Cairoli: “I was looking forward to this race because I really like the track. In free practice this morning I felt better than in the previous race, obviously the pace was much better and this week we worked a little on speed, so the feeling was good. In the first heat, the start went well with sixth place on the first lap and I knew I had to attack to get some positions, but I made a mistake and came into contact with another rider, hitting my knee very hard. I felt it right away because this knee had already given me some problems and it was a great blow. It started to swell and fill with liquid inside, so I stopped. In the second heat, I was the last to start because it is a different format than the GPs and I was a bit surprised by the stupid mistake I made, so I had to line up outside, which is not the ideal starting point. With my knee in this condition, I couldn’t really make a good start and I was out of the top 20. I climbed up to 13th place but I was in a lot of pain with my knee so I decided it was not really a good day. We had a good time, for sure I would have liked to have ended differently, but that’s okay. We’re not too battered, it was just a bad day. “