| The Home of Motocross News
Home News Tragedy: Rene Hofer dies in an Avalanche During Skiing 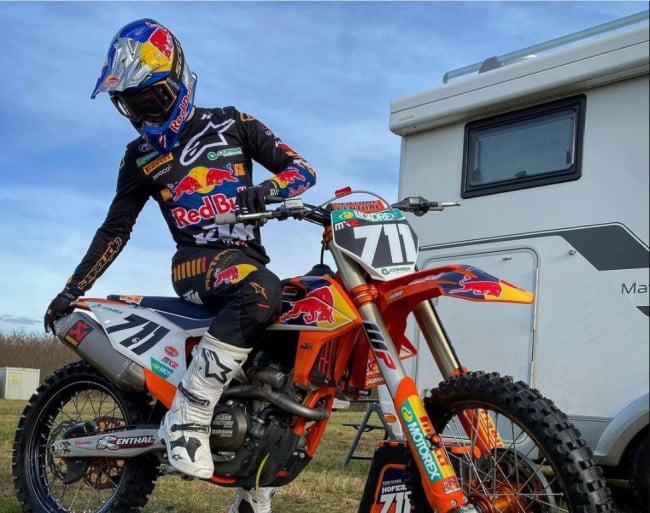 We just heard the news about Rene Hofer getting caught in an avalanche during skiing with other Motocross riders friends. They did not made it out alive 😔.

Rest In Peace to Rene and his friends. We wish all friends, fans and family all the strength in the world coping with this sad loss.

So young to be taken, a future world champion.

There was an avalanche on Saturday afternoon on the Lackenspitze in the municipality of Tweng in Salzburg’s Lungau. Three people were buried. Two of the ski tourers could only be rescued dead, another had to be resuscitated and was flown with the helicopter to the Klagenfurt hospital, seriously injured, where he succumbed to his injuries.

A group of eleven ski tourers was surprised by an avalanche on Saturday afternoon. Tourers wanted to climb the popular Lackenspitze (2,459 meters high) on touring skis.

Eight of the tourers were partially buried by the avalanche. Three of the athletes got completely under the slab, two could only be recovered dead. The third died in the hospital. Five helicopters, mountain rescue and the Red Cross were in action. A crisis intervention center has been set up in the Tweng municipal office. Mountain rescue, Red Cross and police were required with more than 120 emergency services.

The avalanche warning level was issued by the ZAMG Salzburg with level two or from the tree line with three. Above all, warnings were given about tricky snowdrifts in the Tauern, and experience and restraint in tricky areas were required.

Hofer rode a mx bike for the first time when he was three years old. He started racing at the age of four and was able to start a unique winning streak from the age of seven. From 2009 to 2016, Hoover won at least one championship every season. His reward for this success is that he joined the KTM Junior Racing Team, who can see Hofer’s potential.

After the 85cc World Championship and the European 125cc series (he led in 2018 until he was injured), Hofer only participated in the EMX250 branch series of the MX2 World Championship for one season before being called up to the dominant factory Red Bull 2020 The KTM MX2 lineup was mainly due to two spectacular wild card MX2 rides in the summer of 2019, which not only allowed him to score but even broke into the top 10 in Italy.

Red Bull KTM won second place in the first GP in the UK in 2020, and after winning in Austria the following year, his decision to call Hofer quickly paid off.

“Hofer is definitely on the right track, he has everything he needs to succeed in the MX2 and MXGP courses,” Kinigadner said. He looks right.