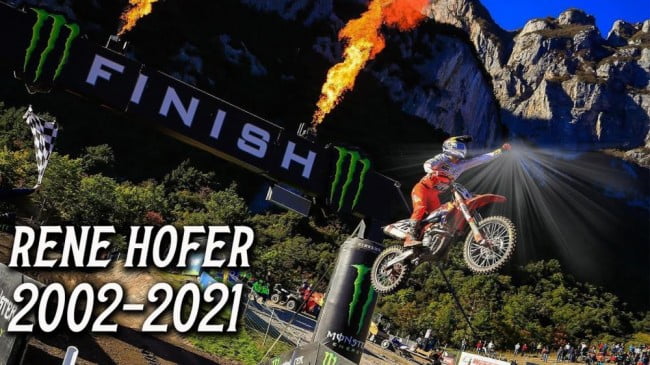 Rene Hofer career was rising to amazing levels, with GP wins and moto wins, it was the friendly nature of Hofer that will be missed inside the GP paddock. While he didn’t live a long life, he lived one that attracted the attention of many people, and his memory will without question be of that young kid with the big smile and always ready for a quick chat. Rest In Peace Rene Hofer.

The cornerstone of a successful career has already been laid by Hofer, who had been a World and European champion in the 85cc class.

After Kinigadner and Matthias Walkner, Hofer was the third Austrian to land a world title in motocross and it’s an accolade that came as no surprise to anyone in 2016.

Hofer first sat on a bike as a three-year-old, has been racing since the tender age of four and was able to start a unique winning streak from the age of just seven. From 2009 to 2016, Hofer won at least one title per season. His reward for that success was his inclusion in the KTM Junior Racing Team, who could see Hofer’s potential.

After the 85cc world championship and a stint in the European 125cc series (a championship he was leading in 2018 until he suffered an injury) Hofer raced just one season in the EMX250 feeder series for the MX2 World Championship before being called up to the dominant factory Red Bull KTM MX2 squad for 2020, mainly thanks to two eye-catching wildcard MX2 rides during the summer of 2019 that saw him not only score points, but even break into the top 10 in Italy.

Red Bull KTM’s decision to call Hofer paid off quickly after he scored a second-place moto finish in the opening GP of 2020 in the UK and followed that up with victory in Austria the following year. In 2021 he scored a GP win; two moto wins and two podiums.

A touching video on Rene Hofer looking at some of his best moments as a Motocross rider – a very big talent!