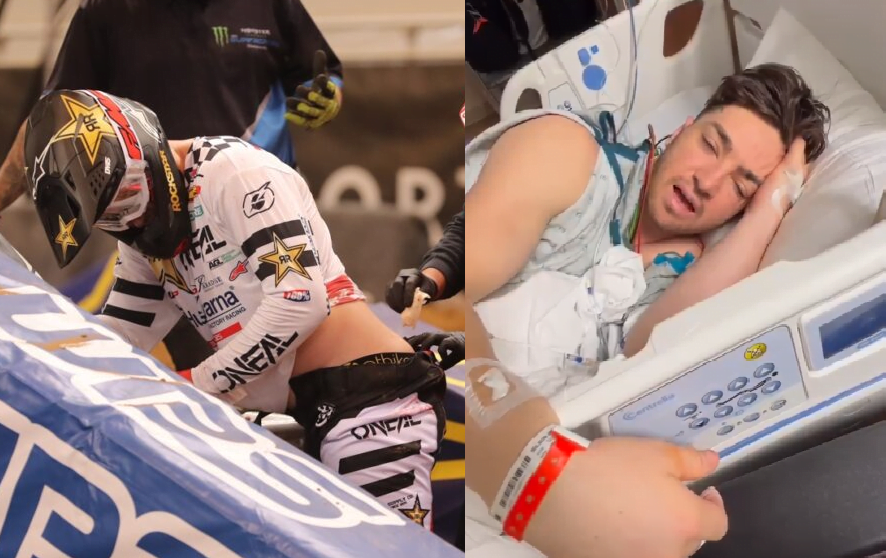 Dean Wilson posted an update on his condition after St. Louis Supercross Round 13 of the AMA Monster Energy Supercross Season

“Not the report that I want to be making. In the first race of the night for me, on the second lap, I went through the whoops and was in like seventh or something. My rear wheel just hit like an edge and shot me left. I was going pretty fast into the whoops and it just shot me into the bales, then I hit this little wall thing. I hit this wall and had to kind of eject from the bike. I was laying there – I hit pretty hard – and then I just felt like really warm. I look down and I was just laying in a pool of blood. The Alpinestars [Medial Unit] crew did a good job, came on the track and bandaged me up as best as they could.

“I think what happened was as I was going towards the wall, I ejected from the bike and my ass just went right into the foot-peg. I got a laceration that was like ten inches deep – the doctor said she could put her whole hand in. We got to the hospital and I had five doctors playing with my butt. Cannot say that I have ever had that before! I went for two operations that night and then I have another operation tomorrow, so kind of a weird injury. I have never had it before. It sucks big time and that is where we are at. I pretty much made myself a second butthole. It’s very uncomfortable and throbbing – I’ve been laying on my side for the past thirty-six hours. It’s miserable.”