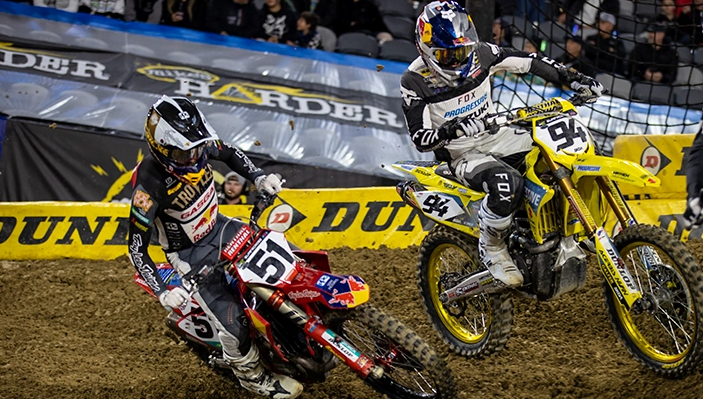 In the second half of the main event, Ken Roczen made several attempts to pass Justin Barcia, but Barcia was determined to hold on to his third place position. Despite Roczen’s efforts, Barcia successfully defended his spot and secured his first podium finish of the year. The intense battle between the two riders can be seen in the footage below:

Barcia said: “In the heat race I was hitting the whoops really well, and staying with Eli, which was sick. Towards the end I had a few mistakes and Anderson got around me good, which was a bummer. But I ended up third and got a solid gate pick. In the main event, I got off to a good start. There was a lot of pressure, and some awesome battles. It was super-gnarly and the track broke down a lot, but I ended up third. I had a lot of fun, and I’m stoked to regroup before heading into Anaheim 2.“

While Roczen said he felt good and is continuing to learn the Suzuki in race conditions: “San Diego! Busy day in the office. We were testing all day to narrow the window of what works and what doesn’t. I am once again extremely stoked on @fcsuspension and @hepmotorsports effort and work to inch closer to the podium. It is not easy to go out and figure out how the bike reacts and what it needs on race day with very limited amount of time on the track.

“None the less we made all the right calls when it came down to the wire and that’s all that matters. It wasn’t the start we were hoping for but i felt great on the bike and on the track and worked my way up to 4th with a great battle for 3rd the entire main event. I feel strong and ready to continue improving my race craft and motorcycle  Hard work really does pay off! See you guys at A2! “