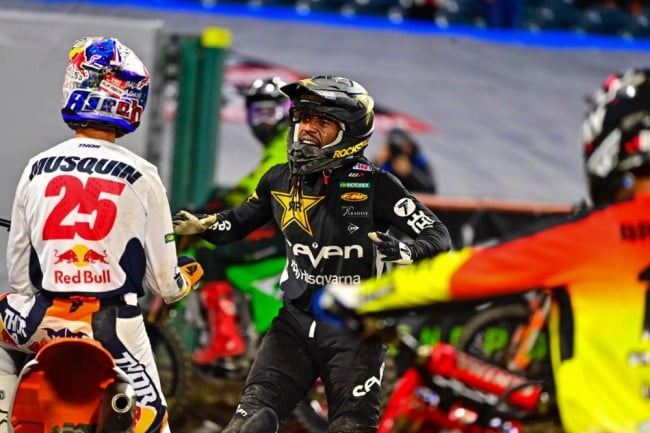 Malcolm Stewart was angry on Marvin Musquin’s attempt to pass that left both men on the deck! Stewart had been having a strong debut on the Rockstar Husqvarna under the guidance of Aldon Baker until the clash with Musquin, that left Stewart finishing seventh while Musquin got up to take fourth. Stewart then gave Musquin an earful of angry frustration immediately after the main.

Musquin said he didn’t expect the move to leave both on the ground saying Stewart didn’t know he was coming: “I’m happy right now. It was a long and tough day, with quite a fight for the Main Event. I did my best with outside gate pick and I made some good passes, so I was pumped on the riding and the intensity early on. I made a couple mistakes and I lost contact with Cooper, and then Malcolm passed me. I tried to pass him to the inside but unfortunately, he railed the corner and we hit each other – he didn’t know I was coming – and we both went down. I got up and came back to fourth place, that was amazing. I’m pumped on the push and with the results, to be honest, with all the drama that happened during the main.”

Stewart didn’t really mention the class or his anger in his press release statement, saying: “I think this was actually one of the better season openers for me since I started in the 450 class.What a crazy season opener! I felt great on the bike and I’m happy with the way I rode. Qualifying faster felt good and I was looking forward to the main, but I ended up going down in the main with another rider. I was happy to salvage seventh at the finish snd leave Angel’s Stadium healthy. On to Oakland!