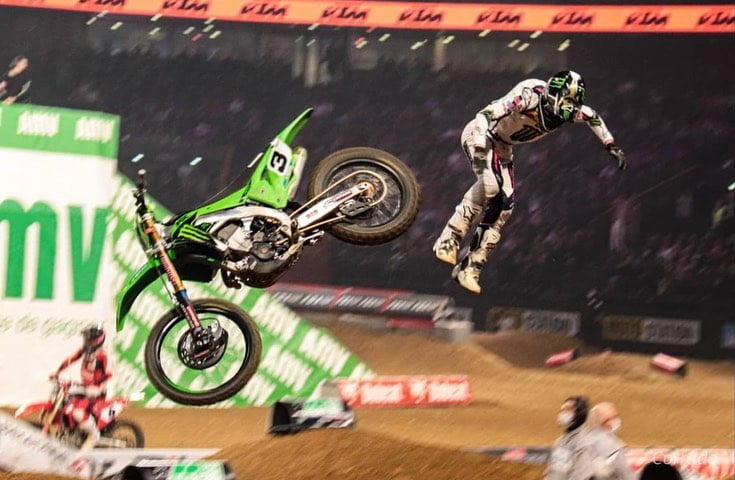 Romain Febvre had a gnarly crash during second heat race at Paris Supercross.He had a good start and was second chasing Marvin Musquin in the front, he had crash in the triple jump and they carried him out on a stretcher..We still don’t have info on his condition, we will post as soon as we get !!

Victim of an impressive fall during the second round, Romain Febvre was evacuated and then taken to hospital. Official Kawasaki suffers from a fractured tibia fibula. He will be operated on in Paris to then begin a period of convalescence that we wish him the best and the shortest possible.

Romain Febvre was very happy to find a Supercross track again! Relaxed, first surprised to see his good speed on the track with the 1st time in free practice, but also the 3rd place in the super-pole. In the first heat, Romain hits the grid, starts a long way off and makes a few mistakes. Despite everything, he took 5th place and signed the 2nd fastest time in the race. All he needed was a good flight to try something on this track. Quickly second, taking the best from Cédric Soubeyras in the second round, the official Kawasaki began to gradually come back to Marvin Musquin.

But before the triple finish, at the worst part of the track, Romain loses control on take-off and throws himself into the air. He crashes on the landing of the jump. We feared the worst given the violence of the fall. After initial examinations on site by doctor Richard Leneuf, a suspicion of a tibia fibula fracture was announced. After X-ray and CT scan, the injury is confirmed for Romain Febvre who will undergo surgery in Paris before returning home. Now it’s time for a recovery that we wish him the best and the fastest with a 2022 season that is coming quickly.

Video of the crash !

Different angle of the crash