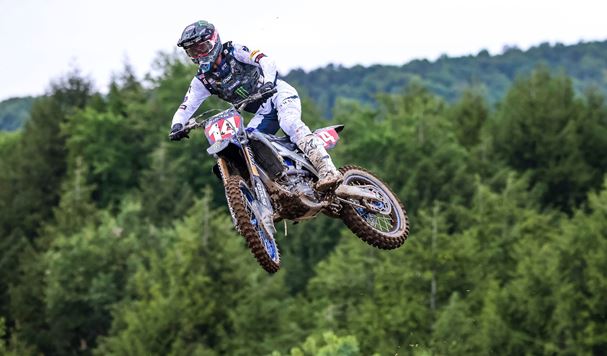 During the second 450 Class moto at the 2021 Budds Creek National, Dylan Ferrandis was on another level—literally. Check out this massive quad he pulled off over the Big Gulp jump, which was reposted by his trainer David Vuillemin on Instagram. Which do you prefer?

In race one Ferrandis and Roczen banged bars out of the gate leaving Ferrandis outside the top five with Roczen up front in second chasing Plessinger for the lead. Ferrandis though found his flow and by the last few laps it was Ferrandis on the back wheel of Roczen for win with Dylan making the move and holding off a determined Roczen at the flag. Ferrandis would lose a point for jumping on a cross flag with Roczen losing two points for jumping the entire table-top.

Race two and it was roles reversed with Ferrandis away in the top three and Roczen outside the top six! Roczen put in some aggressive opening laps and got himself into third ahead if Ferrandis as a four-way battle for the win transpired with Tomac passing Plessinger for the lead but not pulling away.